Cheesecake on Point!, which has been operating primarily as a food truck and a catering operation providing desserts to other restaurants, opens Saturday in a former antiques store at 9809 W. Markham St., Little Rock, where its shopping center neighbors include an insurance agent, Fuller & Sons Hardware, Andy’s and the commercial kitchen in the back where Certified Pies cooks. And yes, it’s directly across West Markham Street from the lot where the food truck regularly parks. (We found a state Health Department permit application from October 2020 that called this “Cheesecake Factory,” which likely caused some confusion.)

The food truck and new bakery represents the “cheesecake brand” of Cinnalightful, a wholesale gourmet bakery that has been operating out of the commercial kitchen, and which supplies cheesecakes and baked goods for multiple restaurants in Arkansas and also food service Sysco.

The new establishment will continue to sell the cheesecake cupcakes and will now also offer whole cheesecakes — in 9-inch, 6-inch, and personal 4-inch sizes — and in at least 12 flavors, says founder/owner Matcha Norwood. Cheesecake by the slice will also be sold. Wednesday, Norwood adds, will be “Pastry Day”; she’ll be selling a different pastry each week from a rotating list of Cinnalightful items — cinnamon rolls, scones, baked doughnuts and macarons. The food truck will still travel to major events. 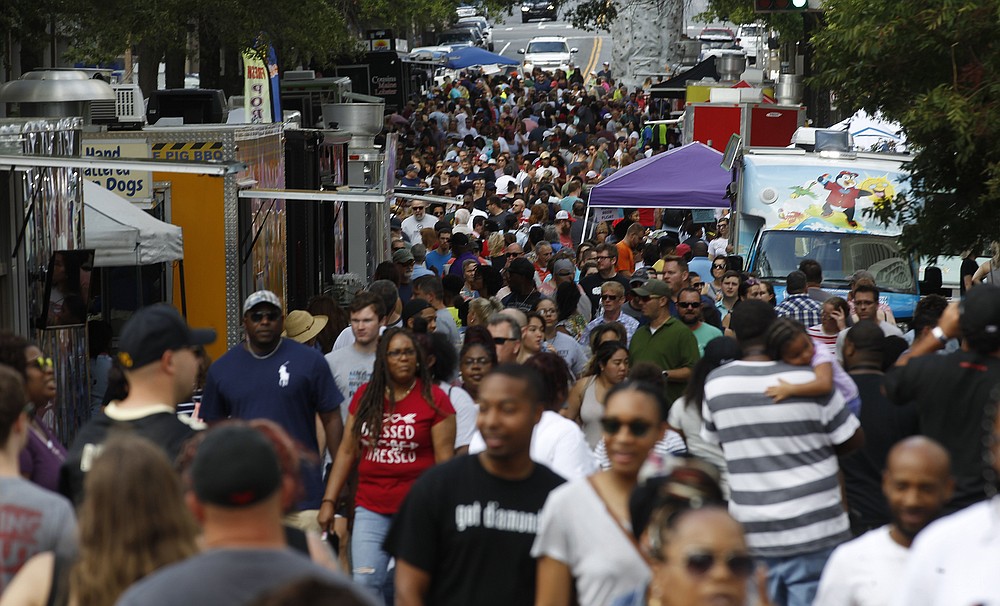 Crowds thronged downtown Little Rock for the 2019 Main Street Food Truck Festival. After being canceled for 2020 because of the pandemic, the festival returns to Main Street Oct. 2. (Democrat-Gazette file photo/Thomas Metthe)

And speaking of food trucks, after its cancellation in 2020, the Downtown Little Rock Partnership has announced it is bringing back the Main Street Food Truck Festival Saturday, Oct. 2, with more than 60 food trucks and trailers expected to participate and with extended hours: 10 a.m-8 p.m.

And still speaking of food trucks, Lili’s Mexican Street Food makes its debut, 5-8 p.m. May 14 at the Bernice Garden, 1401 Main St., Little Rock, with a Mariachi band and face-painting for the kids. Vino’s will supply “adult beverages,” and Facebook is identifying the event as “dog friendly.” The website, Lilicooks.com, describes the enterprise as a “local startup by a former military family (Patrick, Laura and their 4-year-old daughter, Elianna) from California” with a “vision is to bring the authentic Mexican dishes we love and grew up with to our community in Little Rock.” The phone number is (501) 298-5600.

A frieze of active shifting colored lights we spotted along the roofline of Restaurant Bar Mar y Tierra Seafood & Grill, 1900 W. Third St., Little Rock, indicates its long delayed opening might be imminent. Manager Edgar Torres says that pending the restaurant’s final inspections, it could be as soon as a week or a week and a half. The restaurant, which originally was supposed to occupy just the eastern half of the brick building, has extended westward into the other half that was previously a liquor store. The menu will focus mainly on seafood and steaks. There is now a website — restaurant-bar-mar-y-tierra-seafood-grill.business.site — with a map and tentative operating hours: 11 a.m.-10 p.m. Monday-Thursday, 11 a.m.-1 p.m. Friday-Saturday, 11 a.m.-9 p.m. Sunday. And we’re still waiting for the first post on the Facebook page: facebook.com/MaryTierraLittleRockSeafoodandGrill. 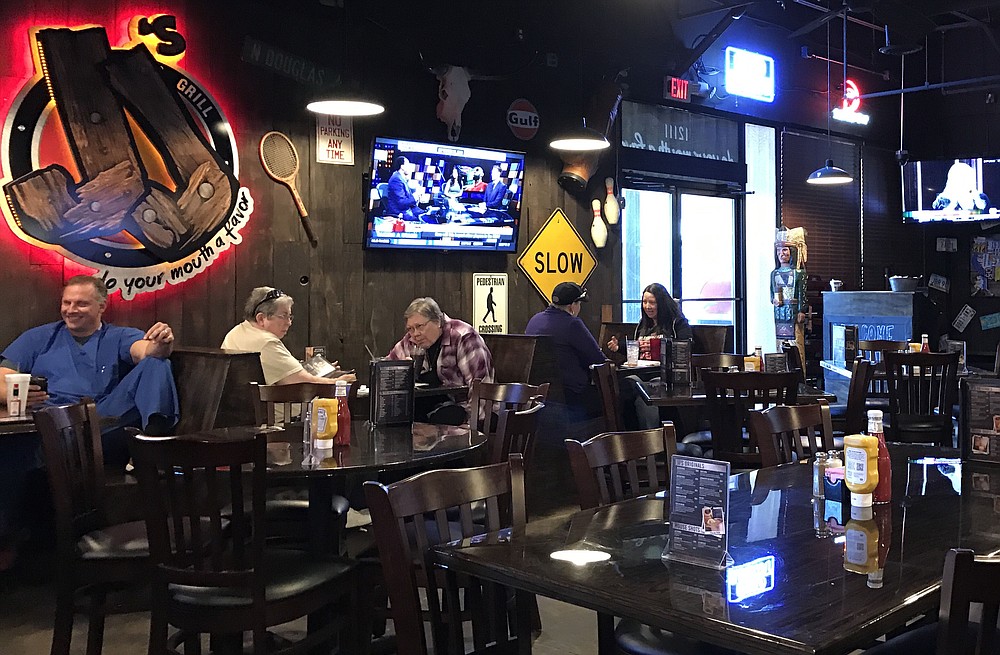 An update on the reopening of the Little Rock outlet of Fayetteville-based mini-chain JJ’s Grill, 12111 W. Markham St., which management confirms will now be Monday. Hours will be 11 a.m.-midnight Monday-Thursday, 11 a.m.-2 a.m. Friday-Saturday if business warrants. The kitchen closes at 10 p.m. The phone number is (501) 414-0848. The Facebook page is facebook.com/jjslittlerock.

Rock City Taco opened Wednesday, more or less on schedule, in the former Poke Hula, 415 E. Third St., Little Rock. It’s owned by the same people who brought you Rock City Kitchen, 1515 W. Seventh St., across from the state Capitol. The menu includes breakfast items, tacos, burritos, quesadillas and a range of sides and snacks. They are gradually easing into “official” hours of 7 a.m.-11 p.m. daily. The phone number is (501) 353-1044; the website is rockcitytaco.com.

JPaul’s Express, 4424 Frazier Pike, Little Rock, reopened about a week ago after an electrical fire shut it down. The restaurant, which took over the former Monkey Burger location a couple of years ago, bills itself as “Home of the Gorilla Burger,” which consists of three 8-ounce patties, cheese, hard-cooked eggs, bacon and onion rings.” Hours are 11 a.m.-6 p.m. Monday-Wednesday and Saturday, 11 a.m.-8 p.m. Thursday-Friday. The phone number is (501) 747-1551.

Tommy Kattaviravong, who at one time owned Sashimi in Maumelle, is back on the culinary scene, operating a teppanyaki grill called Tommisan, inside the Phillips 66 station, 10920 Maumelle Blvd., North Little Rock, where the boulevard meets Counts Massie Road. The menu offers hibachi dishes and combos — teriyaki chicken, New York strip steak, shrimp, salmon, filet mignon and a veggie plate — with choice of hibachi rice or noodles. We’re told that, unlike some quick-hibachi operations, he works in full view of the customers. A line at the bottom of the menu explains that “sushi [is] not available at this moment” — Kattaviravong, of course, had a sushi bar at Sashimi, and briefly operated Sashimi Express out of that same gas station. Hours are 4:30-8:30 p.m. Monday-Saturday. The phone number is (501) 515-8062; the Facebook page is facebook.com/Tommisan-100334905545798.

Sunday being Mother’s Day, and Sunday brunches starting to make a comeback as more people are getting vaccinated against covid-19, if you and your mother are a) planning to venture out to a restaurant on Sunday, and b) planning to occupy a table therein, a reservation is practically a must. A few announcements we’ve encountered:

◼️ Mother’s Day brunch at Loca Luna, 3519 Old Cantrell Road, Little Rock, has already sold out. Meanwhile, next-door Red Door, 3701 Cantrell Road, is returning to its “pre-pandemic reservation policy … and will no longer take reservations for weekend brunch.” And for Mother’s Day, “no parties over 6 will be accepted.”

Speaking of Loca Luna and Red Door, owner/executive chef Mark Abernathy, in an email blast “to all our loyal customers,” warns that labor shortages, food cost increases and difficulties in getting food and bar supplies will afflict the restaurant business above and beyond the damages caused by the pandemic. “The result is a sudden significant increase in our cost of doing business,” he says; “all restaurants and bars will have to significantly increase prices or face serious ramifications.”

The Easterseals Guardians Board has set a virtual “Chef’s Table” fundraiser, in which donors can bid online (at chefstable21.givesmart.com), Tuesday-May 18 (final bids at 9 p.m.) for packages ranging from chef-prepared dinners to cooking classes and catered events. The list as of our deadline includes dinners for six at Petit & Keet and for eight at Cypress Social and catering for 25 from Taziki’s — all part of JTJ Restaurants (Jake Keet, one of the “Js” in JTJ, is the fundraising chair); dinner for six by Yellow Rocket Concepts’ Ben Brainard at his house, with wine from his collection; catering for 50 by Whole Hog Cafe; Spanish dinner for eight at The Pantry West; barbecue party for 16 from Count Porkula; catering for 25 from Tacos 4 Life; and, from Eat My Catfish, a catfish and chicken dinner for 25 and a crawfish boil for 25. The money goes to Easterseals Arkansas to continue providing services to children and adults with disabilities.

And tickets — $46-$76 plus service fees — go on sale at 10 a.m. Friday for “Alton Brown Live — Beyond the Eats,” 7 p.m. March 30, 2022, at Robinson Center Performance Hall, 426 W. Markham St. at Broadway, Little Rock. A limited number of $151 “VIP experience” tickets includes premium seating and an invitation to attend “an intimate Q&A session with Alton Brown,” according to a news release. Call (501) 244-8800 or visit Ticketmaster.com. Brown, the Food Network star who created the live culinary variety show, mixing science, music and food (his “Edible Inevitable Tour” and “Eat Your Science” played in more than 200 cities, including Little Rock in November 2017, attracting more than 350,000 people) says fans can expect “more cooking, more comedy, more music and more potentially dangerous science stuff. … Plus, you’ll see things I’ve never been allowed to do on TV.”

Has a restaurant opened — or closed — near you in the last week or so? Does your favorite eatery have a new menu? Is there a new chef in charge? Drop us a line. Send email to: [email protected]